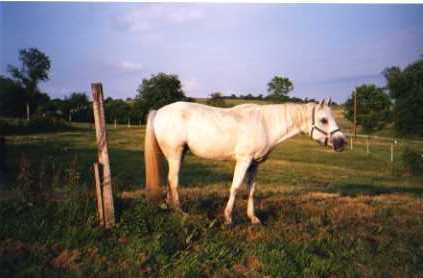 Ever since Barbara was a young child, she would try to rescue every stray animal that wondered onto the farm.  Over the years, the farm has become home to several such animals.  With the recent economic downturn, the number of unwanted, abused and homeless horses and cats has risen to alarming rates.

At least 20 years ago, we were looking for a driving horse.  At a farm in Uniontown, we found Nick.  He was thin, dirty and in much need of attention.  At Barb’s insistence, nick came home with us.  We did not even know if he could drive.  After weeks of feeding and some mild riding, Barb decided that the horse knew way more than he was letting on.  She harnessed Nick and off they went driving down the road.  He was an instant champ to say the least!

Nick quickly became the lead driving horse, performing at weddings, parades and more.  After a few years, Nick was partnered with another horse named Red and became the most solid team ever.  They were our team to pull the buck board wagon that hauled pumpkins for sale, re-creating a scene right out of Jim Hornock’s childhood when he would drive a horse team to St. Vincent grist mill.

Nick’s most honorable showing happened on the solemn day of Jim Hornock’s funeral.  As the hearse carried Jim’s body past the farm, nick led the horses of Pleasure Acres to the fence line.  They stood at attention in their final salute to the man they loved.

Although we lost Red to colic several years ago, Nick continues to be our main horse around here.  He’s about 35 years old now! 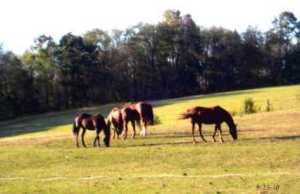 Over the past few years, other rescue horses have become part of the farm family.  The additional horses have all been voluntary and private adoptions.  Most recently, Missy was added to the rescue.  She had been abandoned at a small farm near the Pittsburgh airport.  We tried, unsuccessfully for several months to place her in a save and secure home.  Unable to accomplish placement, we went to visit her in late March.  It only took one visit for Missy to melt our hearts.  Within two weeks, Missy was in our stable.  She definitely has everyone wrapped around her hoof!

The Cats of Pleasure Acres Farm

The number of stray cats dropped off at the farm are too numerous to count.  Most of the time, they are scared, hungry and extremely difficult to catch.  Eventually, they are all neutered or spayed and are vaccinated yearly as well as treated for fleas and ticks.  Pumpkin is our newest addition.  She was saved by a family friend from a junk yard.  The owner of the junkyard planned on killing her if he could only catch her.  We have her now and she thinks she owns the farm!

How you can help:  Any monetary donations can be made to the “Pleasure Acres Equine and Feline Rescue Center.”  This is a privately funded rescue center.  Send your donations to